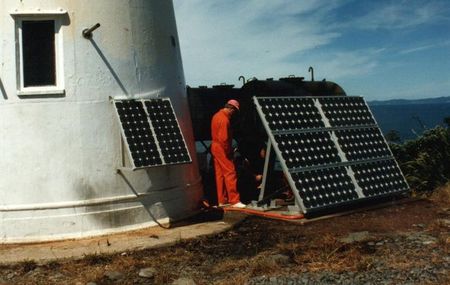 The New Zealand light house service was the first lighthouse service to develop a completely automated service. The smaller beacons were all solar powered but the main lights with 1000 watt lamps and 2 tons of rotating lens needed too much power for effective solarisation. The more accessible lights were powered by mains electricity whilst the more remote lights were reliant on diesel generators. This was a particularly costly solution as the price of fuel was often doubled or more by the transportation costs which often involved both boat and helicopter.

Developments in optics and lamp technology made it possible to reduce power consumption to levels where solarisation became feasible. A 50w lamp was capable of achieving almost the same range as the old 1000W incandescent lamps. In addition the old rotating Fresnel lenses were removed. 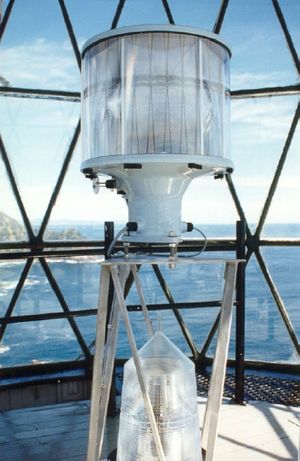 The new lamps were installed and a solar array was designed to suit the very high wind conditions often experienced at these very exposed sites. Careful consideration was given to the size of the array to ensure the light was never extinguished. The control circuitry for the pre-existing three Lister generators was modified so that one was left in a standby role for emergency use should the solar charging fail for any reason. A smaller emergency beacon with its own self-contained solar power system was also installed.

The system has proved to be highly reliable. There have been no outages due to loss of power on the site and the back up light has not been needed. The generator very rarely runs outside of its monthly test regime instigated and monitored remotely.

The installation of solar systems on the major lighthouses around New Zealand has meant a massive reduction in running costs including: the cost of fuel, the cost of getting the fuel to site which was often much higher than the fuel cost, maintenance and overhaul costs for the generators. The systems are more
reliable as there is less to go wrong so much so the at the provided backups are not really needed at all.