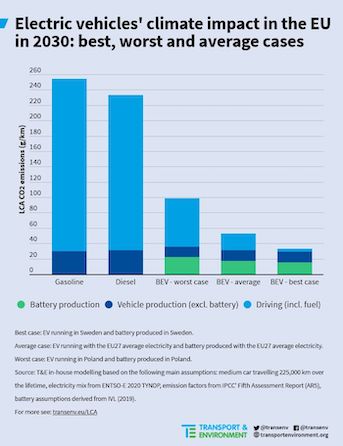 A new analysis of electric vehicles (EVs) versus their petrol and diesel counterparts has been released by European clean transport lobby group Transport & Environment (T&E), and it puts to bed once again misconceptions that EVs have higher emissions over their entire life cycle.

It is often stated that in many places petrol vehicles have less effect on the environment than electric vehicles due to the energy used in manufacturing the batteries and in the inefficiencies of generating the electricity through coal power stations. This study has taken a worse case scenario of batteries made in China with a high level of coal power and a car used in Poland which is highly dependant on coal power on its power grid.

For a average car used in Poland (or Australia) where the electricity is generated mainly by coal, there is still a saving in emissions over the life of the vehicle of about 25%. However, for a car used in a country where grid is predominantly renewable, such as New Zealand, the savings are closer to 80%. Luxury cars have an even larger savings