The BPE range of inverters is designed for both on and off-grid installations. The inverters are all AS/NZS4777 approved for inclusion on our main grid network and in fact improve the quality of power on the network particularly in remoter areas.

In the off grid mode the inverters are controlled by a central BPE Hybrid Inverter which forms a local grid in just the same way as mains power is provided. This can be single or three phase.

The hybrid inverter can have both wind and solar inputs but also allows for ac coupled synchronous inverters to be installed as well. Hybrid inverters can be fitted in groups of up to 3 allowing for 24 kW single phase or 36 kW three phase systems.

More details of BPE products can be found at www.badgerpowerelectronics.com

All-in-one inverters combines solar,wind and a battery inverter/charger into one unit which together with software which can be programmed to determine the most efficient use of your available energy. There will be a 12kW 3 phase unit coming soon. 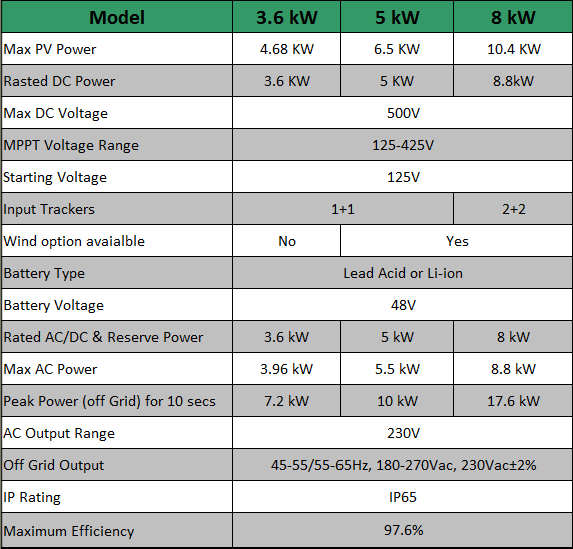 In addition to being able to connect a wind turbine directly to a Hybrid Inverter we also have a dedicated wind inverter with full AS/NZS 4777 compliance.

The AC power output can be precisely regulated by controlling the current and rotor speed through the 12-point power curve settings. This makes it possible for the system to be constantly controlled for optimum speed, thus ensuring maximum performance.

In case the maximum power output was reached, for example by a sudden wind gust, the control box will reduce the rotor speed but redirecting any excess power to a heat resistor used as a dump load.

BPE have the market leading Microinverter technology with 2 and 4 ports, certified CE, SAA and cUL. The 2 Port and 4 Port units are designed to accommodate today’s high output PV panels.

Microinverters work on a modular level, one inverter per solar module, so should one module/inverter fail, the remaining modules will still perform.

Microinverter Systems improve energy harvest and simplify design. Microinverters maximize energy production by reducing the impact of shading, dust, and debris. They also allow you to monitor your solar PV panels at panel level as opposed to a system level, via 24/7 monitoring and analysis. Microinverters are safe as they remove the requirement for high voltage DC cabling within a building.

The ability to collect information from the inverters remotely has made the monitoring of PV systems more efficient than ever before. The Wi-Fi or GSM module ensures stable and efficient monitoring of a user’s Solar power system.

It measures by collecting information from inverters such as status and performance. Data collecting devices make the long-term monitoring of PV systems feasible and efficient.

The Wi-Fi or GSM module can ensure the stable and efficient performance of PV systems, while minimising the monitoring costs and therefore enabling users to achieve great increase in ROI.

Our monitoring system helps take care of your PV system, it makes sure that the system is working to its full capacity and in excellent working condition. It monitors your inverter throughout its entire life-cycle.

You will receive detailed information on your inverter including the energy used that day. You will also receive monthly, yearly and total energy updates through its wireless communication with your router to the internet with the smart Wi-Fi plug.