The SMA Sunny range of inverters is designed for on-grid installations or large or more complex off-grid installs. The inverters are all AS/NZS4777 approved for inclusion on our main grid network and in fact improve the quality of power on the network particularly in remoter areas.

In the off grid mode the inverters are controlled by a central Sunny Island or Sunny Backup Inverter which forms a local grid in just the same way as mains power is provided. This can be single or three phase.

The sunny inverters cover a range form 2 up to 110kW.

More details of SMA products can be found at www.sma-america.com/en_US.html 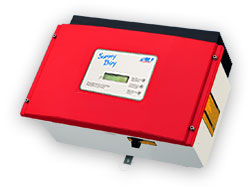 Sunny Boy inverters are designed for Solar Installations. They are suitable for both on grid and larger off grid installs where they are combined with Sunny Islands.

Windy Boy Inverters are designed for grid connect systems or larger off grid systems. They come in a range of sizes from 2kW to 6kW to suite the size of the turbine. They can be stacked together for larger out puts and can feed single or three phase systems.

The Sunny Island is the brains behind a larger off grid system. It in effect sets up its own local grid fed from a set of batteries. Most of the generation supplies are then fed onto the AC Grid. The Sunny Island can also have mains or a generator feeding into it and will auitomatically start the generator when the batteries get low or the load gets to high for the inverter. They come in a range of sizes up to 5kW but can be grouped together to give either single or 3 phase for any system size up to 110KW.

Mounting large stand-alone systems with little effort: the Multicluster Boxes for the Sunny Island or Sunny Backup 5048 provides for the easy installation of stand-alone and hybrid systems of up to 110 kW.

The boxes take over the AC main distribution and offer an integrated generator and load shedding protection. A parallel connection from two to four 3 phase clusters - each consisting of three Sunny Islands 5048 - is possible.

The Sunny Backup is very similar to the Sunny Island except that it has the capacity to feed electricity back into the grid for mains connected systems. This is of most benefit if you are in an area with a highly unreliable main grid and often get mains failures. With the Backup you can have the security of a set of batteries to keep you going and be able to continue to use any renewable energy generators which would normally have to be disconnected from the grid in times of mains failure.